The ad was released on Sunday during the 91st Academy Awards. The tagline of the Ad is “Its only crazy until you do it”, a play on Nike’s famous “Just do it”. 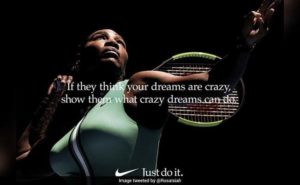 The Ad starts with showing how women are labelled ‘crazy’, ‘dramatic’ and ‘hysterical’ for showing even the most basic emotions.

Semenya is awaiting a verdict by the Court for Arbitration for Sport as to whether she can compete like every other woman, without medical intervention to suppress her naturally high levels of testosterone.

It also brings into highlight Serena’s story of winning 23 grand slams and having a baby and then coming back for more.

The ad is narrated entirely by Serena who also appears in the ad. She has for long been a target of racist and sexist attacks. She was even penalized in September 2018 for her display of outrage during the U.S. open final. She was fined $17,000 for breaking her racket in that anger. It even went on to her being accused of directing “verbal abuse” toward a chair umpire. She was given a remark of “Crazy” for this behavior whereas it was just a display of human emotions.

Show them what crazy dreams can do. #justdoit ⠀ ?: Sound on

Since being shared online, the ad has collected over 9 million views on Nike’s Instagram account, along with another 2 million on Serena Williams’.

It has also collected hundreds of thousands of appreciative comments and tweets.