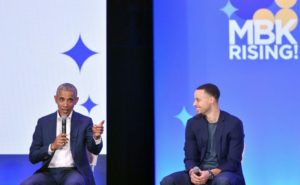 Former President Barack Obama spoke on Tuesday about how to “be a man” and the need to combat stereotypes of masculinity that “trap” young men, specifically young men of color.

He spoke about the importance of being a good person. “All of us have to recognize that being a man is first and foremost being a good human,” he said. “That means being responsible, working hard, being kind, respectful, compassionate.”

In conversation with NBA star Steph Curry, Obama spoke about the need to create spaces. He mentioned that, “where young men of colour, and young men generally, don’t feel as if to be respected they have to act a certain way.”

He added: “The notion that somehow defining yourself as a man is dependent on, are you able to put somebody else down instead of lifting them up … are you able to dominate as opposed to support… that is an old view. A view that thankfully I see a lot of young people rejecting.”

Obama also spoke about how racism plays a role in perpetuating toxic masculinity. He said, “Racism historically in this society sends a message that you are ‘less than’. We feel we have to compensate by exaggerating stereotypical ways men are supposed to act. And that’s a trap.”

He added that much of the “violence and pain” communities suffer comes from men seeking respect, including through gun violence. “And that is a self-defeating model for being a man.

Obama noted how cultural influences, like music, specifically hip-hop and rap, are often built around “talking about how I have more money than you, I can disrespect you.”

“Ironically, that shows the vulnerability you feel,” Obama said. “If you were very confident about your sexuality, you don’t have to have eight women around you twerking… you seem stressed that you gotta be acting that way.”

“I got one woman who I’m very happy with,” he added, as the audience erupted in applause.

Curry, in turn, spoke about the need for men to be “open about their feelings” and have space where they can do that freely. He mentioned that the locker room with his teammates allows him to do that.

Obama added that women often already have such spaces, where they can talk about their feelings. However, he added that young women of color “need an enormous amount of support, too,” as they deal with a “double burden” of racism and sexism.

He recounted how in his own household, while he would often get together with his “boys,” as he put it, to watch or play a game of basketball, they might not say much to each other.

Meanwhile, Michelle Obama “will get with her girlfriends, they’ll show up at noon, they’ll be talking, I’ll leave, come back three hours later, they are still talking,” Obama joked. “They’ve cried, they’ve broken down every terrible thing that I did, said he’s worth keeping anyway.”

“That’s the difference,” he added, noting girls often create spaces “to talk about vulnerabilities, doubts, lack of confidence” but men don’t do that. “It has to do with socialization.”