Why do we ever watch Bollywood’s love story? Because there is something about romantic films that has us all excited and happy! Though they’re over in three odd hours, watching movies is when you can cozy up to your hubby and give your marital relationship a boost to established love. So, check online for these romantic Hindi movies, get your baby to sleep and spend some quality time with your significant other. Continue reading for the list of romantic movies to watch during lockdown.

Romantic Movies To Watch During Lockdown

Here are 15 romantic movies to watch during lockdown with your partner.

It is a tale about college besties, Jai, Rajput’s most non-violent, and Aditi, a strongly aggressive and impulsive girl. After college they want to settle down in life but not with each other. They don’t know or embrace mutual love until Jai finds a girl and Aditi starts to miss him and his company.

Another beautiful take on romance, Socha Na Tha, came from the love guru of Indian cinema. The debut film by Imtiaz Ali is still one of our favorite romantic films, despite receiving a lukewarm response at the box office. Two individuals who are scheduled to get married, fail to do so but ultimately end up falling in love with one another. No love at first sight, no over-the-top scenes, this movie has been as real as it is getting.

At first sight, R Madhavan’s character Maddy made us all believe in the idea of love and we always love him because of the way he treated Reena, a role Dia Mirza’s essay. This story of love showed us that it’s hard to find guys like him and if we do, then we have to keep onto them.

The film showed us how two people too can fall in love, pushed into an arranged marriage. The character of Ayushmann Khurrana, Prem Prakash Tiwari, marries, under parental strain, an affluent, overweight girl Sandhya (Bhumi Pednekar), but never accepts her as his wife. They are filing a divorce lawsuit. Yet then, as court orders them to stick together for six months, get to understand each other.

While many find the character of Ranbir problematic, this film managed to some degree to capture the agony of unrequited love. A film about love for tedha, one that isn’t staying straight. We have been there and the film speaks to us in certain parts.

‘Duniya kya Kahegi’ has put many relationships to an end, and so parental pressure. It’s because of this, that we can relate to this film and its characters, Aakash and Vani. Both were satisfied with each other but after finishing college, they could not continue their relationship. Why? For what? Since Vani’s parents are pressuring her to marry the man they believe is perfect for her.

Inter-caste marriage, well a bitter fact that we all know in India all too well. Krish, the Punjabi boy, falls in love with Ananya, a girl from South India. After they have finished their studies, they agree to marry. Now, this is where the toughest part starts for both the characters and we can relate to them because, as they say in India, marriages are typically not between individuals but between families.

Certainly, some of us will relate in the film to R Madhavan’s character Manu as for him all that mattered was the happiness of Tanu. He liked Tanu, and even agreed to help her elope with Raja, his boyfriend. He kept quietly caring for her until Tanu realized it on her own one day.

If you love someone with true intentions, it often turns into your power. When they’re around, you smile, you feel safe in their arms, and every day seems like a fantasy. Heer’s unexpected recovery from her illness when Jordan was seen as a sign of pure affection. It is a sequence in the movie that some of us can relate to. She is now standing on her feet, and her blood counts are rising significantly. I mean, when you’re around someone you love, miracles do happen. Did you ever feel it?

Six newly married couples, and a happy ride to Goa for a four-day journey. This film had several different stories to tell but Boman Irani and Shabana Azmi were the ones we could identify with. The pair from the middle ages endlessly ridiculed at people for their second marriage, taught us how to live our lives as fully as possible without thinking “Duniya kya sochegi.”

Masaan was a rare gem you can’t let skip. This sensitive film deepened our deepest fear and vulnerability and spoke to us about love and loss. This sensitive film The love of Deepak for Shalu does not know any caste obstacles. It is not a  film with a happy ending or a tragic ending, but despite our struggles, it encourages us to move on.

Jab We Met has taught us to love, laugh and live. One of the best Imtiaz Ali movies.

Who wouldn’t relate to Geet, a feisty Punjabi girl who helped Aditya through his disturbance, a sadly-depressed businessman. She was not only a crying shoulder for Aditya but also a special place after his recovery in his heart. Her character is someone in our lives that we all need.

Though the film begins on a very unrealistic note, Rab Ne Bana Di Jodi is the tale of how Surinder puts his heart into winning his wife’s love and affection, Taani. To her, he changes his name (Raj) and attitude in terms of his physical appearance, so that, if they partner for a dance competition, Taani won’t know him. Yet things get complicated as Raj, his altering personality, gradually starts to grow feelings for him. The film then tackled the question of Taani’s choice between the man she married or the man she loved. This film beautifully demonstrates the real challenges of an arranged marriage and that both spouses will adjust to the sense of marital bliss within themselves.

Wake Up Sid, with Ranbir Kapoor in the lead, was probably one of our time’s most connected films. Sid’s character epitomized our generation’s frustration. It beautifully explored the complexities of an urban connection.

The film presented a relationship between an autistic girl and a deaf and mute boy. This was not one of those wealthy boys who meets poor girl account. With powerful performances that struck a chord for his honest love portrayal. 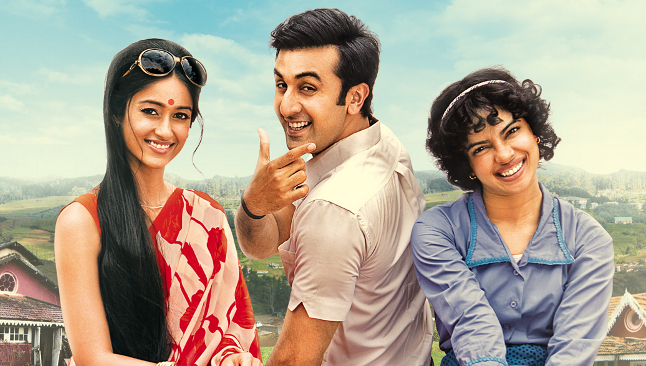 These are 15 romantic movies to watch during lockdown with your partner.

Partners tend to rely less on each other, after having a baby. Films are a perfect way to get closer to your spouse again and what better time to start during lock-down days.